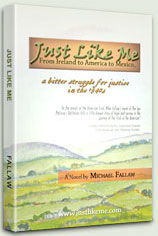 In Ireland, the famine, the result of generations of British Colonial rule, causes widespread death and the emigration of millions of Irish. In Mexico, the peasant-led revolt that frees the people from Spanish rule does not release them from their aristocratic yoke. Texas, sold by Santa Anna to save his skin, is now controlled by the Anglos, and its borders are in dispute. Irish immigrant soldiers in the American Army are forced to chose between their oath of allegiance to their new country or  the Catholic religion of their homeland; shared with the people they fight.

In America, the concept of manifest destiny is widespread. The election of James K. Polk in 1844 is the catalyst for a series of events that forever changed the shape of the United States and its relationship with Mexico. The proponents of nativism and their Know-Nothing Party oppress Irish immigrants in American cities.

As immigrants join the US Army, they are quickly impressed into the battle with Mexico. They experience great injustice in the American War, and hundreds choose to desert and join the Mexican Army as part of the San Patricio Battalion.

This novel tells the story of the youngest member of the Toomey family, Ned, from rural county Cork.  Events force Ned and his sister to leave Ireland.  In America he joins the U. S. Army to secure his sisters release from indentured servitude.  In the Army he sees the same injustice he was subject to in Ireland and he must choose between his oath of allegiance and his love for his fellow Mexican Catholics.

Mike Fallaw is a retired businessman living on a small farm in Northern Indiana with his artist wife. Mike and his wife, Bernadette have five grown daughters and 22 grandchildren.

“Mike Fallaw has written a first novel of a young Irishman in the time of the Great Famine, whose story of exile and injustice is both heartbreaking and wise.” – EDWARD CONLON, NEW YORK TIMES Bestselling Author of “Blue Blood.”

“This story catches you, it’s very descriptive. It truthfully represents conditions in Mexico at the time of this war and accurately shows the peasant plight.” – ELSA TORFER, Mexican Art and History Professor, State University of Mexico.