Everyone can hum this haunting Irish ballad that inevitably brings a tear to the eye. For all its popularity, the most requested "Irish" song and its origins still remain an enigma. Is it even Irish? Did the song initially grace the Irish counntryside as the winsome ballad of an itinerant piper, or did it first take form as a blind musician's bow danced across the strings of a fiddle?

Travel with Malachy on his journey for the truth as he interviews musicologists, historians, academics, celebrities, and Irish icons. Join the expedition and trace the complex evolution and enduring mystique of "Danny Boy" in an unforgettable tribute that brilliantly weaves history with folklore.

Oh Danny Boy, the pipes, the pipes, are calling
From glen to glen, and down the mountain side
The summer's gone, and all the flowers are dying
''Tis you, 'tis you must go and I must bide.
But come ye back when summer's in the meadow
Or when the valley's hushed and white with snow
"Tis I'll be here in sunshine or in shadow
Oh Danny Boy, oh Danny boy, I love you so. 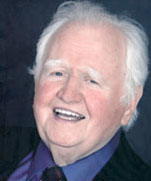 Malachy McCourt was born in Brooklyn, USA and from the age of three was raised in Limerick, Ireland.  A very undistinguished academic career plus the need to eat led him to leave school at the age of thirteen to begin work in Ireland and England as a laborer.

He returned to the land of his birth at the age of twenty and again worked at the manual tasks such as longshoreman, truck loader, dishwasher, until he became an actor.  That career took him to Broadway and Off-Broadway and regional theatres in plays such as Mass Appeal, Da, The Hostage, Inherit the Wind, Carousel and Translations.  The soap operas such as Ryan's Hope, Search for Tomorrow, One Life to Live, and All My Children were also a good source of work and sustenance as were the movies Molly Maguires, She's the One, The Devil's Own, Green Card, and TV movies such as You Can't Go Home Again and The Dain Curse. Due to a heavy schedule of writing, book signings and public appearances McCourt had to take a sabbatical from the acting trade but is now back after completing five movies Happy Hour, Guru of Sex, Gods and Generals, and Ash Wednesday plus a running part in the HBO prison series Oz.

In the early seventies he was one of the first radio talk show hosts on WMCA and also worked at WOR, WNYC and WABC. He was a frequent guest on the Tonight Show, Merv Griffin and Tom Snyder shows and most recently he was a guest on Conan O’Brien and the Late, Late Show on CBS.

Malachy has had articles published in many periodicals including  New York Newsday, National Geographic, Conscience Magazine and New York Times.

As well as being the co-author of the play A Couple of Blaguards with his brother Frank, Malachy has written his own New York Times bestseller memoir, A Monk Swimming, published by Hyperion Press. His memoir, Singing My Him Song, now out in paperback is published by Harper Collins. Running Press recently published four of Malachy’s books: the history of the song Danny Boy, a history of The Claddagh Ring,  Voices of Ireland, an anthology, and Malachy McCourt’s History of Ireland. Recent books, Harold Be Thy Name and Bush Lies in State, are published by Welcome Rain.  In the works is I Never Drink When I’m Sober for Harper Collins.   Malachy writes a column, Sez I to Myself, that appears  in the Manhattan Spirit, The Westsider and Our Town in NYC. (Read his latest article).

Malachy McCourt is happily married to Diana for almost four decades, has five grown children and is grandfather to four. He owes a great deal to his friend Bill W.