When bride-to-be Harri Ryan ends up at the ER with a panic attack on her wedding day, her twin brother, George, jokes that she's the most glamorous patient there. But this is no joke. It's Harri's second try at the wedding, and when she returns to her Dublin apartment, her fiancé, James, has already packed his belongings. Harri doesn't want to lose him, but she doesn't know how to convince James it won't happen a third time.

George, who knows Harri better than anyone, has a hunch there's more to the story than cold feet. He confronts their parents, who are acting strangely -- as if they're hiding a secret. And the truth they reluctantly reveal devastates both twins. Now, not only has Harri lost James, but George's relationship with his partner, Aidan, begins to fall apart, and both twins have to fight to hold on to those they love -- and to themselves. As the world they thought they knew crumbles around them, can Harri and George find a way to pick up the pieces before it's too late?
In her newest novel, talented young Irish writer Anna McPartlin paints a rich, multi-textured picture of ordinary people swept up in a scandal they never could have imagined. As Sure as the Sun manages to tickle your funny bone, tug at your heartstrings, and remind you never to give up on love. 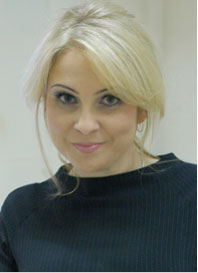 In the early nineties, Anna ran an alternative cabaret called Tales of the City in a run down bar on Capel Street. The show comprised of a Dutch torch singer, a folk rock band, an ancient alcoholic queen of monologues, and a waitress in drag … not to mention comedy. Anna was a stand up comedienne for four years and it is her experience writing sketches that ignited her passion for storytelling.

Friends and family are Anna’s inspiration. Given the amount of upheaval and tragedy Anna has experienced in her life from a very young age, it is no wonder friends and family are what she cherishes most and evidence of this is in all of her work. It tickles your funny bone, tugs at your heartstrings, and reminds you to never give up on love.

Anna’s lived many kinds of lives in this short lifetime her parents separated when she was five and her mother was diagnosed with MS when she was six. She lived with and cared for her Mum and her Gran until the age of twelve and was then fostered by her Aunt and Uncle who lived in Kenmare, Co. Kerry. At the age of 14, Anna was introduced to her half sister who had been living thirty five miles away from her. At 17, she lost her mother, and a few years later she lost a close friend to suicide, as well as her father to cancer, though she never really knew him. She nearly lost her own life when she was hit by a car aged 21. Surviving loss and being faced with death inspired Anna to write about the darker side of life but because she has been lucky enough to be surrounded by joyful people her work and life is brimming with hope and laughter.

Anna’s husband Donal is a drummer who has worked with Jack Lukeman and Junkster. He’s currently in an up and coming band called Torchlight. Anna’s been supporting and following her husband around the world for sixteen years and she looks forward to continuing doing so for the next 16 years.