A Three-Decade and Three-Thousand-Mile Journey Home  tells the story of a thirty-year search for the author's grandmother Kate’s Irish roots.

The author and her grandmother were very close.  Her grandmother had a sad and turbulent childhood and adolescence at the turn of the twentieth century in New Jersey.  She was motherless by age nine and in the care of various relations.  By fourteen, she was placed as a live-in domestic servant and by sixteen she was married.  She knew very little about her family and nothing about her grandparents or earlier ancestors.  The book, written in the form of a letter to the author's grandmother, tells the story of her search and the discoveries she made, and traces the family from County Sligo, Ireland in the late 18th century to their emigration to America during the potato famine and through the successive generations into the early 20th century in Jersey City, New Jersey. 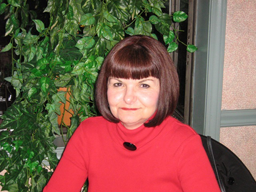 Maureen Wlodarczyk is a senior operations manager and consultant in the commercial real estate financial services industry and an avid genealogical researcher. She is also a hobbyist folk artist and painter, a collector of country antiques and an admitted “history addict”.  Maureen is also an officer of the Flannery Clan organization based in Dublin, Ireland