The setting of Far From the Land is rural Ireland in the 1950s. Thomas Rice has written a memoir about a way of life that no longer exists: no running water, no toilets, no electricity, and little access to education, jobs or basic health care. Early on the story plunges into a culture haunted by recent memories of famines and still showing some of the scars from The Great Hunger of the 1840s.

Writing about father-son relationships, the author recalls the night his absentee IRA father returns from England for the first time in ten years. Known as "The Voice" because of his tenor's talent, the impact of his first song, Thomas Moore's haunting tribute to the sweetheart of his martyred friend, Robert Emmet, was beautiful. The poem was titled, She is Far From the Land. No one in the kitchen that night ever forgot it. It was the perfect song, sung by the perfect voice, at the perfect time.

Far From the Land has the benefit of five decades of retrospection as the author brings each of his characters to life with startling honesty, without nostalgia or cliché. Readers will come away with a renewed respect for rural Irish culture and her people. 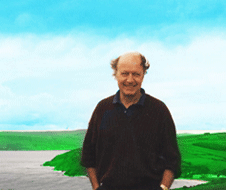 Thomas J. Rice grew up in Ireland, dropping out of school at age 12 to work on the family farm. Before immigrating to the United States at 17, he world in England as a steelworker and tractor driver. He graduated from Cornell University in 1966 and received his Master's from University College, Dublin in 1968. He has a PhD in Sociology from Purdue University and teaches sociology at the National University of Ireland, Dublin, Denison University and Georgetown University.
He wrote countless amounts of journal articles, essays, reviews and op/ed pieces -- mostly about Northern Ireland-- and has authored or co-authored four books. He lives in Andover, Massachusetts with his wife.