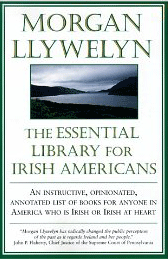 Morgan Llywelyn, aside from being one of the great writers of novels about the romance and adventure of Irish history, is a lover of all things Irish, well read in Irish fact and fiction. Now she gives generously of her love and knowledge in a list of books recommended heartily and wittily. More than simply a list, The Essential Library for Irish Americans is an education in the Irishness of Ireland. Here at last is an instructive, opinionated, annotated list of books for anyone in America who is Irish or Irish at heart.

Chosen for their accuracy and their pleasures, these books are described in clear, concise language that is in itself a pleasure. Ms. Llywelyn does not summarize the contents, but rather tells of the experiences that are in store for readers of each individual book.

Arranged in broad categories, such as biography and autobiography, history, poetry, and fiction, her beguiling commentary and the books she recommends promise hours of delight for anyone willing to open his heart to the Irish American experience.

American-born Irish historical novelist Llywelyn has compiled an annotated bibliography of works she feels anyone interested in Irish studies ought to read. Descriptions are provided for titles in categories and many works are recent publications, such as Thomas Cahill's How the Irish Saved Civilization, but standard Irish classics are well represented, e.g., Sean O'Casey's Autobiographies, J.M. Synge's Aran Islands, and Cecil Woodham-Smith's The Great Hunger.

As with similar "must read" lists, one can argue for the inclusion of other works, but this compilation is one person's opinion. One notable omission, however, is any collection of short stories. Nonetheless, Llywelyn provides the basis for a solid grounding in Irish studies.