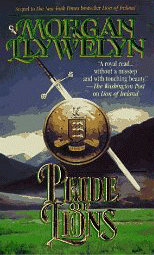 The perils of royal succession and a choice between love and glory form the dominant themes of Llywelyn's lively sequel to Lion of Ireland. The previous novel described the rise of High King Brian Boru, who became known as the "Charlemagne of Ireland" after he managed to briefly unite the tribes of the Emerald Isle at the end of the 10th century.

Now it's Brian's 15-year-old son, Donough, who aspires to the throne, made ambitious by a brief initial success in battle against the Vikings at Contarf, where Brian has met his death. But Donough's brother Teigue also claims the crown, and when Teigue drives Donough from the family fortress, their father's carefully crafted alliances begin to crumble.

Journeying north to the Scottish kingdom of Alba, Donough seeks his own political ties, through an arranged marriage that binds him to the King of England; also traveling with him is his treacherous, manipulative mother, who hopes to use him to regain the power she lost upon Brian's death. When Donough returns, he must reconcile his inability to reunite Ireland and the failure of his marriage with lush memories of a passionate affair with a Druid girl.

Llywelyn tells a strong story distinguished by its psychological depth and by his knowledge of ancient Irish history.