When a controversial American senator is attacked during the opening of a Donegal gold mine, Garda Inspector Benedict Devlin is blamed for a lapse in security. The shooting of an illegal immigrant in Belfast the same day leads Devlin to a vicious people-smuggling ring operating in the city. Then Leon Bradley, the young environmentalist who attacked the senator, is found murdered near the site of the mine.

Devlin questions the group of itinerant travellers who have gathered around a nearby river hoping to strike gold themselves, and soon is becomes clear to Devlin that the mine is a front for something far more sinister. "Bleed a River Deep" is the new novel from one of the most acclaimed new crime-writers on the scene: a labyrinthine tale of big business, the new Europe, and the dispossessed. Politics, industry and the criminal underworld collide in McGilloway's most accomplished, most gripping, and most sophisticated novel yet. 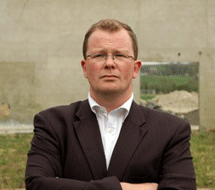