As children, Eliza Blacknall and William Denton ran wild over the fields of southern Ireland in youthful mischief; they swore they would be friends forever but then fate took Will away to England, while Eliza stayed behind to become a proper Irish countess.

Years later, Will finally makes his way home- as an English soldier sent to crush the Irish uprising. When he spies the lovely Eliza, he is captivated by the passionate woman she has become. But Eliza's passions have led her to join the Irish rebel cause, and Will and Eliza now find themselves on opposite sides of a dangerous conflict or will they rekindle an old friendship?

When Ireland explodes in bloody rebellion, Will's regiment is ordered to the front lines, and he is forced to choose between his duty to the English king and his love for Eliza and their Irish homeland. 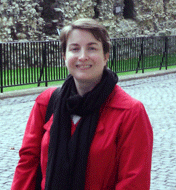 Laurel McKee lives in Oklahoma with a menagerie of two cats, a Pug, and a bossy miniature poodle. She loves dance classes, collecting cheesy travel souvenirs, and watching the Food Network- even though she doesn't cook. Countess of Scandal is McKee's first novel. Her follow-up novel, Duchess of Sin, will be released in December 2010.