Over the last thirty years Thomas Kennedy has quietly established a reputation as a novelist of rare grace and vision. Yet American readers and critics may not know his name for the simple reason his fiction has largely been unavailable in America.

The first in his acclaimed "quartet" of novels set in his adopted home of Copenhagen, In the Company of Angels revolves around several pairs of relationships-- stemming from the arrival in town of a survivor of Pinochet's Chile. As the refugee resists the treatment he recieves at the Center, he reaches out to others, including a divorced woman coping with domestic abuse.

Through their stories Kennedy explores the subtle and overt manipulation at the heart of many relationships: between torturer and victum, doctor and patient, parent and child, husband and wife. All striving, ultimately, toward human redemption. 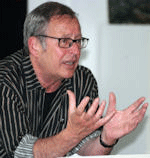 Thomas E. Kennedy was born in New York City and has lived in Copenhagen for over two decades. He has written more than twenty books, including novels, short stories, and essays, and has won numerous awards, including the Eric Hoffer Award. In the Company of Angels is one of four novels consituting the Copenhagen Quartet, which were initially published by a small press in Galway.

Kennedy holds M.F.A. from Vermont College and a Ph.D. from the University of Copenhagen and is a core member of Fairleigh Dickinson University's Global M.F.A. Program.