When Mitchell is released from prison after serving three years for a vicious attack he doesn't remember, Billy Norton is there to pick him up. But Norton works for Tommy Logan, a ruthless loan shark lowlife with plans Mitchell wants nothing to do with.

Attempting to stay out of Logan's way, he finds work at the Holland Park mansion of faded movie actress, Lillian Palmer, where he has to deal with her mysterious butler, Jordan. It isn't long before Mitchell's violent past catches up with him and people start getting hurt. When his disturbed sister Briony is threatened, Mitchell is forced to act.

London Boulebard is a masterwork of double dealing and suspense from one of the greatest crime writers of our time. 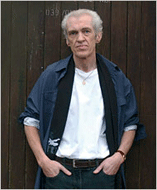 Ken Bruen has been a finalist for the Edgar and Anthony Awards, and has won a Macavity Award, a Berry Award, and two Shamus Awards for the Jack Taylor series. He has been an English teacher in Africa, Japan, Southeast Asia and South America. He now lives in Galway, Ireland.