"I wanted to bring one of my heroes, arguably the greatest soldier Scotland has ever produced, to a new generation. Known as James the Good in Scotland, and the Black Douglas in England, this book was a joy to write. His is an extra-ordinary story. His relationship with Robert the Bruce began at the Arrickstane at the head of Annandale in southern Scotland in 1306, and ended in Andulucia in southern Spain in 1330, and is a story writers of fiction would find hard to emulate."

"This book boasts a colour picture section, and maps pinpointing where the major events of James' life took place. It tells of the battles he fought in, and how he almost captured two succesive kings of England. His name so terrified the invaders of Scotland that mothers would use his name to chide their children, threatening that "the Black Douglas would get them!"

The book also contains a route guide to visit places where James visited in England. 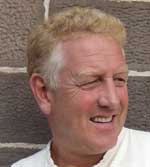 David Robertson Ross (28 February 1958 – 2 January 2010) was a Scottish author and historian. He published eight books, most of them mixing elements of Scottish history and travel literature.David was, until the time of his death, the elected convener of The Society of William Wallace, a non-political organisation aimed to uphold the memory of the Scottish folk hero. He was a key speaker at the yearly events organised by the society, specifically the William Wallace Memorial Days held in Elderslie (allegedly Wallace's birthplace) and in Robroyston, where Wallace was captured. On the 700th anniversary of Wallace's capture and subsequent execution he undertook a 450-mile walk in Wallace's honour.He was a strong supporter of Scottish independence.

David died on the 2nd of January 2010 in his home in East Kilbride due to a heart attack. Celtic Force Publishing will be selling David's books at iBAM!.