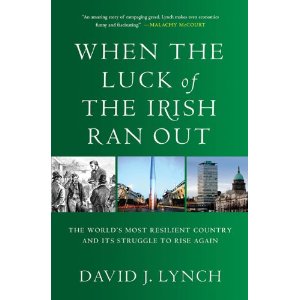 Few countries have been as dramatically transformed in recent years as Ireland. Once a culturally repressed land shadowed by terrorism and on the brink of economic collapse, Ireland finally emerged in the late 1990s as the fastest-growing country in Europe, with the typical citizen enjoying a higher standard of living than the average Brit.

Just a few years after celebrating their newly-won status among the world’s richest societies, the Irish are now saddled with a wounded, shrinking economy, soaring unemployment, and ruined public finances. After so many centuries of impoverishment, how did the Irish finally get rich, and how did they then fritter away so much so quickly? Veteran journalist David J. Lynch offers an insightful, character-driven narrative of how the Irish boom came to be and how it went bust. He opens our eyes to a nation’s downfall through the lived experience of individual citizens: the people responsible for the current crisis as well as the ordinary men and women enduring it.

David J. Lynch, 50, covers the global economy for USA TODAY. He joined the paper in 1994 as a staff writer in the Money section before becoming the founding bureau chief in both London and Beijing. Lynch covered the war in Kosovo and was an embedded reporter with the U.S. Marines in the invasion of Iraq. In 2001, he became the first journalist from USA TODAY to be selected for the prestigious Nieman fellowship at Harvard University. He has reported from more than 50 countries.

He is the author of the forthcoming "When The Luck of The Irish Ran Out: The World's Most Resilient Country and Its Struggle to Rise Again," an account of modern Ireland's journey from rags to riches and back again.

An experienced public speaker, Lynch has made numerous television appearances on BBC and Sky News in London and C-SPAN and PBS in the United States. Before joining USA TODAY, Lynch covered the aerospace industry for The Orange County Register in southern California, where he won several awards. In the 1980s, he was the editor of a trade publication focused on national security issues in Washington, D.C., called Defense Week.

Lynch has a masters degree in international relations from Yale University and a B.A. from Wesleyan University in Middletown, Ct. He lives outside Washington with his wife Kathleen and their three sons.