From the beginning of time Leprechaun’s mined for gold below the land of Ireland, and as far away as the land of the Norse.
Buy the Book!

There were millions of them in Ireland till the middle of the 19th century, when they mysteriously began to disappear.  There are now only 236 left in the whole of Ireland. They live below the Cooley Mountains, above Carlingford in Co Louth. Carraig is the Elder and spokes person of those who are left. He narrates the story of their lives from the beginning of time, right up to the present day to a local man Mc Coillte, who has the gift to communicate with them.

Mc Coillte lobbied for years to have them protected under E.U. law. Protection finally came in 2009. The story traces the geological upheaval in Ireland fifty million years ago, and the effects it had on their habitat. They experienced the coming of the ice age and tell how it affected their lives. They witnessed the first humans arriving in Ireland, and were there at the first human birth and death.

They built a network of tunnels all over Ireland so that Leprechaun clans from every county could meet and compare the progress of humans in their part of Ireland. They saw the Druids directing the building of tombs at Newgrange. They saw the devastation caused by the Vikings, and were witness to every major historical event that shaped the Ireland that we know today. When the great famine hit Ireland in 1845, it decimated the human population. The world of Leprechaun’s was about to change too. In the millions of years that went before none had died but now the unthinkable was about to happen. 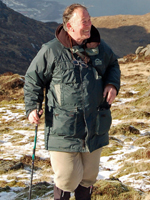 I was born in 1944.
I am as alive now as I was then.
I am still a child.
I live in Carlingford in Co. Louth,
in the shadow of beauty, myths, and legends.
I wonder why I have been so blessed!