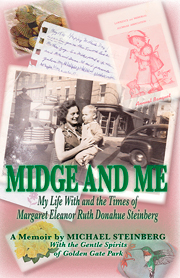 Synopsis
I was feeling tumultuous. It was May 2009, the day after my third Mother's Day without Midge.

Time has inevitably lessened the sting of her loss, but that was painful too. I'd returned to San Francisco from my home state of Connecticut only a week before.

With a blank notebook in hand and a few pens in my pocket, I made my way to a bench in the radiant Fuchsia Dell of golden Gate Park. As soon as I put pen to paper I knew there was so much that needed to be opened up and written down.

For the next month, nearly every day found me in the park with it all tumbling out and I grabbed the shards of memory and wove them into these tales for her and for me and for you . . .

To Buy the Book: Mail $12 to Michael Steinberg, 1531 Fulton St., San Francisco, CA 94117. Or you can contact Michael at This email address is being protected from spambots. You need JavaScript enabled to view it.

Chapter One
The Day After Mother’s Day

Daughter of Francis Joseph and Grace Kirk Donahue. Sister of Jim, Joe, Jack, Grace, Bub, Ann and Jean Donahue. As well as to stillborn sister Mary Ellen, who had to be buried by the side of the cemetery by her father.

Us being myself, Michael the first born, followed by David, Lisa and Susan, who all came tagging along after me over the next 10 years.

I’m writing this in the Fuchsia Dell of Golden Gate Park in San Francisco, where I landed once again a week ago today. After spending most of the past seven years Back East in Connecticut, helping out my elderly parents, I told myself. But also because my sisters there needed my support too. And I needed to reconnect with where I came from to help me understand where I might be going in the latter part of my own life.

It did and didn’t work out that way, so here I sit on this bright and breezy Northern California afternoon, glancing up occasionally from these pages to watch the boughs of Monterey Pine and Eucalyptus trees bounce in the wind.

I suppose I’m just about as far from where Midge and Lou’s ashes are buried, at Bourne National Military Cemetery on Cape Cod in Massachusetts, as you can be in the Continental United States.

Yet Midge and Lou loved the San Francisco Bay Area too, though not as much as their beloved Cape Cod. And so perhaps it’s fitting that I’m here now beginning this recounting of memories of my mother among the spring greenery and full palette of flowers abounding all around me.

Midge would have been praising her tulips and lilies and bleeding hearts if she were still with us back in our southeastern Connecticut hometown of Niantic, on Long Island Sound, pointing out the birds flitting back and forth from her feeder, threatening to break out her shillelagh as she railed against the indomitable squirrels who eternally raided it.

Life is easier and harder without her, in ways that will emerge along the way in the yarns to follow.

“It’s hard to say goodbye,” I struggled to get out when she had made it clear to us that her end was near.

“Who says it’s goodbye?” she spat back at me like I was some squirrel trying to run off with her final wishes.

Maybe she was right.

Why else would I be doing this?

The sun’s moved behind a eucalyptus branch. An invasive species, they say. Just like the rest of us here.

Time to move on.

Michael Neil Donahue Steinberg is a veteran activist, journalist and author. This is his tenth book.