In We Have a Goo 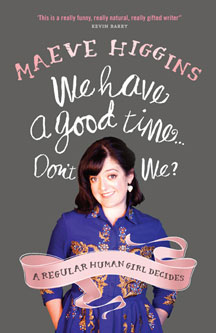 d Time...Don't We? Maeve Higgins, comedian and lady, smashes the brittle veneer on the creme brulee of life and hands around spoons, so we can all taste the delicious absurdity that lies beneath.Buy the Book!

She then promises to stop making terrible food analogies about everything.
From terrifying hen nights, malevolent dolphins and angry bakers, to runaway cats, a stalker who won't commit and the curse of over-politeness, Maeve writes with warmth and wit about what it's like to be a regular human girl. And, crucially, she finally reveals the truth about her relationship with Michael Fassbender.
We Have a Good Time...Don't We? introduces a strikingly original voice that celebrates the truth of what we really feel about ourselves through these hilarious and perceptive snapshots of a life considered.

Maeve studied photography in college and worked in a clothes shop until 2004. Then, one magical March evening, she discovered her dream life as a stand-up comedian. Since then she has written and performed various shows for comedy festivals all around the world. Maeve starred in RTE’s Naked Camera and went on to make her own comedy series with her sister Lilly called Fancy Vittles, which was a cult hit. She lives in Dublin and has part ownership of a very gentle Alsatian.

Maeve Higgins lives in London and is available for interview

For more information, or to arrange an interview, please contact This email address is being protected from spambots. You need JavaScript enabled to view it.