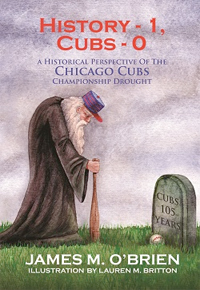 The Chicago Cubs last won the World Series in 1908, only the fifth World Series ever played. Going into this 2013 season, it will be at least 105 years before the Cubs win their next World Series. Buy the Book!

As unique as is the Cubs championship drought, History 1, Cubs 0  is equally unique. Rather than minimize the extent and the effect of this drought, this book explores it in depth. Decade by decade, each chapter progressively lists events that are closer in time to the Cubs 1908 championship than we are today (e.g., the War of 1812, Jefferson's presidency, the Lewis and Clark expedition, etc.), and it then lists events that have happened since 1908 (e.g., World War I, Ford's automated automobile assembly line, Monopoly, television, etc.). Events include all World Series winners, presidents, statehoods, historical events - world, U.S., Illinois and Chicago, baseball and sports historic performances, inventions, etc. The Index alone lists over 2,300 events by year!

Jim is a lawyer and a lifelong Cub fan having been born in Chicago April 9, 1947.
During his lifetime the Cubs have never played in a World Series.

Raised in a Chicagoland family, all sports were followed year round, but baseball was king. Jim's dad was a semi-pro player out of St. Paul, Minnesota, and coashed American Legion baseball players, and even high school champion bowlers!

Now, Jim's family is entering the fifth generation without a Cubs team playing in the World Series.

His book puts into perspective, just how long its been since we had a World Series victory!

Maybe this book will break the "Curse of the Goat" and be the catalyst to a Cubs' fan's dreams!