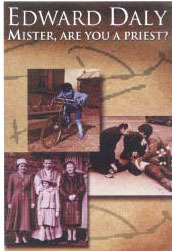 Edward Daly's memoirs, Mister, Are You a Priest?, offer a moving, first-person narrative of what it was like for a young man who aspired to the priesthood to grow up on the border of midcentury Northern Ireland.  Buy the Book!

This anecdotal account of Daly's life as a curate on the Northern Irish border, his role as parish priest at St. Eugene's Cathedral in Derry, and as Catholic religious advisor for RTÉ in Dublin, centers around bearing witness to the atrocities and evolution of sectarian violence in Northern Ireland in the 1960s and '70s, as he describes his efforts to make lasting humanitarian connections with individuals through the years. Daly portrays not only the living conditions of his parishioners throughout the years, but also the astonishing social burden the church was required to bear in providing housing, education, visitation, and social services far beyond the religious realm. Daly's book shows us how community service, when conducted by religious institutions, can be tremendously complicated on a social level.

This is often the story of Daly's search for balance. He confesses that his own education lacked an understanding of Irish history, but was filled with the myth and folklore leavened by the Irish Revival. He demonstrates the value of balancing individual identity with a role in the church; Daly does not hesitate to discuss the parochial and harmful conventions and traditions of the church that can hinder the growth of individuals, and he acknowledges the inherent struggle between social institutions and the needs of individuals. Daly's story also brings to light the slippery nature of the desire for truth and the individual's role in creating the truth, both as a witness of Bloody Sunday and as an autobiographer. Despite the kindness of many individuals, ignorance persists in Anglo-Irish politics, which Daly describes in detail. He professes his outrage over the circumstances on Bloody Sunday in 1972 -- in which he was an involved 153observer -- when thiteeen unarmed men were gunned down by British soldiers. The tragedy is still under investigation in 2001: oddly, Daly provides little description of the reasons given for British dismissal of the Bloody Sunday killings in the first tribunal. In another gap, Daly makes only passing allusions to the ways in which the Second Vatican Council changed the Catholic church and how that may have affected his service as well as his political point of view. In Mister, Are You a Priest?, Daly completely deromanticizes sectarian violence. His narrative helps us to understand why identity studies are so necessary; rarely do his neighbors, friends, and loved ones fit neatly into such categories as Protestant, Catholic, Unionist, Republican, or even man or woman.