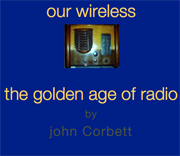 Savour the excitement of the fifties and sixties- an era when radio was king. In the countryside it was usual for communities to come together to celebrate important events and wireless sat comfortably with this tradition.

OUR WIRELESS: The Golden Age of Radio

Lots of villages had just one receiver and ours, like many a radio, became the focal point for those who wanted to listen to the news, matches or to grab an earful of a play or special event that was being aired.  Prior to electrification, two batteries were needed to power the wireless in order to keep people in touch with the magical world beyond their ken.

Read about the programmes, presenters and entertainers that meant so much to the ordinary people of the fifties and sixties. Enriched with illustrations and anecdotes.

This book captures the atmosphere and delights of that forgotten era and details some of the great presenters and entertainers who played such an important role in the lives of ordinary folk back then. 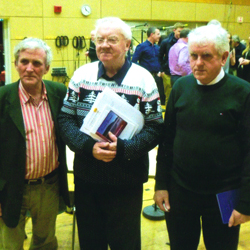 John worked in various positions while attending College. These included farm work, labouring, clerical work and switchboard operating. After graduating I taught Irish and English in St. Cuan’s College for more than twenty years. I was in charge of Debating and Public Speaking for most of that time.

I took early retirement and since then I’ve written a number of books, poems, plays and stories. Published works include: ‘A Time And Place For Mirth And Mischief,' 'Daoine Dathúla An Iarthair' and 'Making Shapes With Slates and Marla.' My wife, Margaret, helped with the compilation of this last book.

My plays have been aired on local radio and my writings have been broadcast on ‘Sunday Miscellany’ on RTE Radio One and on Lyric FM. I got first prize in The Cecil Day Lewis Poetry Award in 2001 and also won the English and Irish poetry sections of The Mid and North West Radio Awards in later years.

Reading, Music, Drama, Radio. History, Astronomy and Walking. I am actively involved in local affairs and have chaired St. Kerrill’s Festival Committee for the past fourteen years. I edit an annual magazine for the aforementioned festival and I contribute a monthly column on farming and folklore in ‘Ireland’s Own.