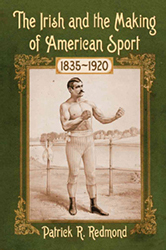 An interesting history of the Irish influence on sport in America.

Available for Kindle and in Paperback from Amazon

Jerrold Casway coined the phrase "The Emerald Age of Baseball" to describe the 1890s, when so many Irish names dominated teams' rosters. But one can easily agree--and expand--that the period from the mid-1830s well into the first decade of the 20th century and assign the term to American sports in general. This book covers the Irish sportsman from the arrival of James "Deaf" Burke in 1836 through to Jack B. Kelly's rejection by Henley regatta and his subsequent gold medal at the 1920 Olympics. It avoids recounting the various victories and defeats of the Irish sportsman, seeking instead to deal with the complex interaction that he had with alcohol, gambling and Sunday leisure: pleasures that were banned in most of America at some time or other between 1836 and 1920. This book also covers the Irish sportsman's close relations with politicians, his role in labor relations, his violent lifestyle--and by contrast--his participation in bringing respectability to sport. It also deals with native Irish sports in America, the part played by the Irish in "Team USA's" initial international sporting ventures, and in the making and breaking of amateurism within sport.