This intriguing story follows Quinn Parker as he searches his family roots and discovers letters, written in Irish Gaelic, that reveal a long hidden family scandal. As Quinn travels to Ireland to find out more, his journey becomes very interesting -- and then tragic. Buy it here!

Synopsis
Quinn Parker, a retired attorney, begins a family history project to learn about family that his Grandfather, Jeremiah Desmond, may have left behind in Ireland when he fled during the Famine. Quinn's mother sparks his interest in one of their last conversations before she passes away that there were other Desmond family members that did not leave Ireland during the famine years. Quinn's innocent appearing family history project takes a turn he would regret when he discovers a packet of old, yellowed letters written in Gaelic and stored in his mother's basement. Quinn receives more than he bargains for when he receives the translations from the Irish translator. His journey searching for answers takes him to the genealogy libraries of Georgia, Minnesota, Utah, and eventually to Ireland where he finds himself embroiled in the ethno-political conflict between Ulster and the Republic. As he progresses in his search, parties on both sides of the Irish question see him as an increasing threat to their interests. The trail he is following leads to the discovery of forged documents, fraudulent conversion of massive family wealth and eventually to murder. In time Quinn realizes the dangerous journey he is on but by then he has been drawn in too deep and tragedy awaits the final outcome. 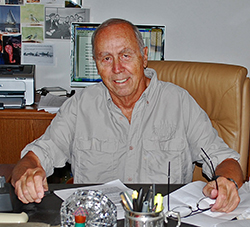 About the Author:
R. Thomas Roe, resides along the ocean in Florida and in the mountains of Colorado. Both venues afford him ideal locations to work on his hobby which is writing. He has served 26 years as a pilot with the United States Air Force and retired as a full Colonel. He enjoys his associations with various USAF groups and is an avid reader and mountain biker. Col. Roe graduated from St. Thomas University and from William Mitchell College of Law, both in St. Paul, MN.