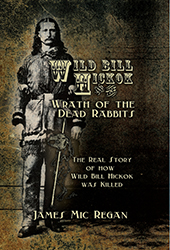 The real story of how Wild Bill Hickok was killed. Buy it here!

Synopsis
On the afternoon of August 2, 1876, in the Number Ten Saloon of Deadwood, Dakota Territory, Wild Bill Hickok was shot in the back and killed while playing cards. A man named Jack McCall was charged  with the murder and found innocent at first. In 1877, however, he was re-arrested, re-tried and then executed by hanging for the murder of Wild Bill. These basic facts can be found in history books  and are well documented. However, there are many questions that have remained unanswered:

- Why did "Colorado" Charlie Utter, the self-proclaimed, partner of Wild Bill, escort Hickok to the Number Ten Saloon and then leave him moments before he was assassinated?
- Why would Jack McCall use the excuse that he shot Wild Bill because Hickok had killed his brother, when McCall never had a brother?
- How did the card player sitting across from Wild Bill get shot?
- How did Jack McCall, a known vagrant about Deadwood, become a well-dressed man with money to burn the day after his first trial?
- What was Jack McCall attempting to talk about just before he was hung, when he wrote to two newspapers, offering up "The Plot To Kill Wild Bill"?
- Who gunned down Wild Bill’s trusted friend, California Joe, and why in a U.S. Army fort, within two months of Hickok being killed?
- And finally, what involvement did an Irish gang from New York, called the Dead Rabbits, have in the murder of Wild Bill?

For the first time, these questions can now be answered through the inside knowledge and meticulous research of author James Mic Regan.

About the Author
Irish to the core, author James Mic Regan’s life’s work has been researching the history of the Dead Rabbits gang and “Wild Bill” Hickok. Regan currently resides in Prescott, Arizona.