Set against the backdrop of 1840s Ireland and America, To Ride a White Horse is an epic historical saga of hope, loyalty, the strength of the human spirit, and the power of love. Buy E-Book Here

With Ireland ravaged by famine, and England unsympathetic to its plight, Kathleen Deacey, a spirited and strong-willed young Irish woman faces a devastating choice—leave her country to find work or risk dying there. Despising the English for refusing to help Ireland, she sets sail for Canada, determined to save her family and find her missing fiancé.

But her voyage doesn't go as planned and she ends up in America, forced to accept the help of an English whaling captain, Jack Montgomery, to survive. As Jack helps her search for her fiancé and fight to save her family and country, she must make an impossible choice—remain loyal to Ireland or follow her heart.

With insight and compassion, award-winning author Pamela Ford captures the anguish of a devastating period in Irish history, illuminates the resilience of the human spirit and celebrates the strength of love. To Ride a White Horse is a deeply-moving novel that wraps itself around the heart and doesn't let go. 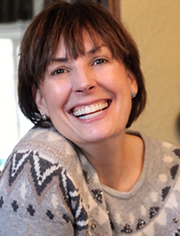 Pamela Ford is the award-winning author of contemporary and historical romance. Though she was born in the U.S., she grew up hearing stories from her grandparents and parents about her Irish ancestors. Although it has been generations since those ancestors emigrated, the family pride in being Irish has never waned – and it is that which drove her to begin researching and writing To Ride a White Horse. Pam has won numerous awards including the Booksellers Best and the Laurel Wreath, and is a two-time Golden Heart Finalist.

Check out her other five books here! pamelaford.net

Publishers Weekly starred review:
"Ford steps back in time with a sweeping historical love story that hits all the marks ... Pacing the plot for maximum tension, Ford skillfully conveys the anguish and fury of not only her heroine, but all the struggling Irish both at home and abroad. She delivers genuine heat by teasing out the passion between her protagonists. Ford has made a deeply satisfying foray into new territory."

Amazon Top 500 Reviewer, Vine Voice:
"Good as this book is as a romance, it's even better as a historical novel. This is a touching story. Realistic, with some very gritty, some very poignant moments... This is an unexpectedly good novel."

Goodreads First Reads winner:  "Overwhelming! Six stars! What a stunning story! Pamela Ford’s book To Ride a White Horse made me go through a series of intense emotions, I cried, hoped, laughed! It’s a breathtaking story of love, hope and courage! I have just discovered a little gem!"

Fresh Fiction:
"A splendid historical romance with characters to cheer."