Like so many young girls growing up in the poverty-stricken West of Ireland in the 1930’s Roisin Keavney loves her family, but dreams of a wealthy husband and a better life. Buy Book Here

In defiance of her father’s wishes she escapes the tensions within her family by fleeing to the sea shore where she encounters the older, mysterious Tom McCafferty. Could he be the one?    Buy eBook Here

Over the next few years her daydreams and fantasies collide with the harsh realities of life during her turbulent coming of age. 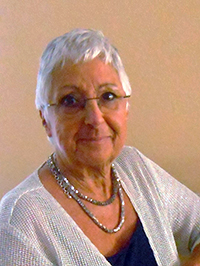 Irish author Ann O’Farrell is graduate of Trinity College, Dublin, and spent many years as a drama therapist and a theater set and costume designer before retiring to Florida and becoming a full-time writer. In addition to “Roisin’s Song” Ann has written four other Irish historical novels; The Norah's Children Trilogy: “Norah’s Children,” “Michael,” “Going Home,” and “Kitty's Hive.”
More about the author and her novels at:  www.annofarrell.net

: Listen to the author read from Roisin's Song

“The greatness of a work is … when you can’t stand for the story to end. It is not that the ending is disappointing, but rather, you want the book to go on. You’ve closed the cover … sit quietly …  and imagine the tale’s next scene.

“Roisin’s Song” is such a story. Ann’s writing weaves a spell, transporting readers hand in hand into the story … with Roisin. Rich with symbolism and stark, cold reality, this compelling tale touches on the damage we do to each other, and the healing we can do to ourselves. Overwhelmed with heartache, hope wins.
John O’Brien. Jr. Editor. Ohio Irish American News

“O’Farrell is a sure writer, sketching the details of the time and place vividly. The stark contrasts of Roisin’s experiences are delivered in spare, heart-rending prose … with fully drawn characters …