The life of this little evacuee couldn’t be more different from those other unlucky children his own age, who had been left behind in a state of dreamy delirium on the battered streets of London.” Buy e-Book Here

While World War II was raging and turmoil spread throughout Europe, thousands of children were evacuated in the hope of protecting them from the trauma of war. Newly-born Edward (Teddy), who was rescued from the terror of the London Blitz by his parents and sent to live with his grandmother in Tipperary, Ireland.     Buy Book Here
He spent his childhood among the vibrant hillside community, where he had the rare opportunity to develop at the hands of nature. The Early Morning Light is a celebration of his young life, which was a stark contrast to those of countless other children living traumatised across Europe.

Inspired by literary greats such as Virgil and Kafka, The Early Morning Light is a compelling memoir that will appeal to those who enjoy reading about family life during the Second World War 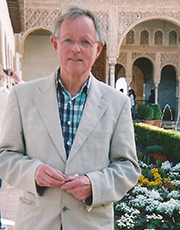 Edward Forde Hickey: We all have roots – like the author’s in rural Ireland in the 1940s.  His great-great-grandfather (Edmund) was a hedge-school teacher in the hills of north Tipperary in the mid-19th century.  Most of his grandfather’s many brothers and sisters were scattered in Australia and the USA.

It is vital to remember our social background, no matter what part of the world our forefathers came from.

My early childhood was during an age that had remained unchanged for over two hundred years.  It came at the tail end of a type of life that faded away dramatically in the late 1950s, disappearing in the face of inevitable social, moral, cultural and technological change and never to be repeated.

After my wartime preschool years with my maternal grandmother (I was an infant evacuee in 1940 from London’s Blitz) I was to spend my schooldays in the heart of a busy London where I went on to grammar school and university to study Classics.

I was privileged  (and my prolonged education probably helped) to have had the determination and impulse to store and recreate during my retirement my personal pastoral memorial to an early childhood that richly flourished amongst a vibrant 1940s hillside community.

The primary emphasis of The Early Morning Light (and the other books that I am now in the process of writing) is not the small boy of this present book – even though this child’s gradual development is meant as an important statement about a pre-school education at the hands of nature rather than institutionalized learning.

The book’s emphasis is more comprehensive than that: it is a tightly woven tapestry of a closely-knit community and the simple, uncomplicated lives that they were living – a tapestry that clearly contrasts with our speedy society’s ever-increasing material luxuries and transitional complexities, where present needs never seem able to suffice – where personal happiness can often be an illusion and fleetingly grasped.

Hickey's next book is called DOWN THE PATH OF MORNING - about a group of adolescents in the late 1940s. They live in the same rural region of north Tipperary as the characters of the first book.

This next book describes their many exciting adventures and their overall moral development (with respect to Mark Twain) as they struggle towards adulthood.  There is 'an all's well that ends well' section at the end of the book.

Reviews of The Early Morning Light

‘A wonderful collection of tales, resounding with a sense of loss and valediction... An exquisite description of nature.’
- Ben Evans, Literary Editor, Addison & Cole