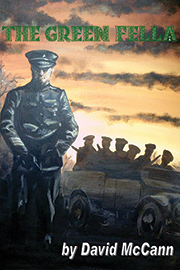 Ireland in 1920 was one country within the British Empire, Sergeant Patrick Joseph Collins of The Royal Irish Constabulary, a native of County Cork, is the Sergeant in charge of a Small isolated Police Barracks in Sixmilecross County Tyrone. Buy E-Book Here

Policing is a hard job but it is going to get harder, as an Irish war of independence has been declared. Sergeant Collins, and the other members of the Royal Irish Constabulary (RIC) are going to be the men in the front line...

He is the author of 'The Green Fella' which is a fictional story based in 1920's Ireland, that follows Sergeant Patrick Joseph Collins from Co Cork,  a member of the then all Ireland police force the Royal Irish Constabluary who is based in Sixmilecross, Co Tyrone. “It follows him as the policeman in charge of the barracks and the difficult struggles he faces both personally and professionally during the troubles of the 1920's.