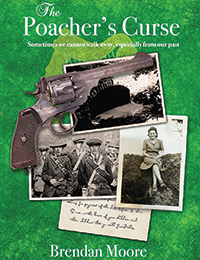 Ireland 1919 a country on the verge of another revolution. It's been three years since the failed Easter Rising of 1916. Veterans from the rising are organising themselves and recruiting for a different type of war. Buy E-Book Here

Ned, Seanie and Martin are in their early twenties. They work and live on the Berkley Estate a symbol of Ireland's colonisation. They are experiencing romance and the thrills of young life. The rebellion reaches their parish and the past comes back to take it's revenge. ISBN: 9780992698843, 207 pages

Buy Book From O'Mahony's in Ireland

As seen in Irish Mail on Sunday national paper.

The appetite has been whetted yet we have not been overburdened with novels or drama from our revolutionary era despite a surfeit of anniversary tomes. The gap in that market has been filled here with the publication of The Poacher's Curse. Brendan Moore's novel is set in Ireland in 1919 when the war against the English intensified. It follows the lives of three inseparable friends - Ned, Seanie, and Martin as the conflict reaches their parish. This debut novel has strong, central relationships of ordinary characters caught up in great historical events. They're so well written that they easily sustain our interest.
Moore's strength is to engage us with a gripping and pacy narrative.
The book begins by revealing the curse that is to cast a long shadow over the characters' lives while the combustible mix of priest, poacher and a retired British army officer magistrate create evocative scenes for events that follow.
John Lee 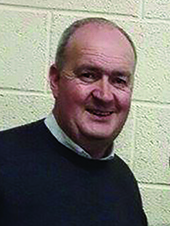 Read the book on the plane coming home from Dublin Oct 5. Engaged right from the start. No spoilers so I won't say more about the fate of the 3 friends. Especially liked the epilogue for the continuity and wrapup. I feel closer than ever to my parent's time who were young people at that time in Ireland. I am recommending it to my friends and their book clubs here in Michigan. Thanks Brendan and good luck!
Mary B. Killeen

Brendan Moore was born in 1966 in the village of Knocklong, Co Limerick, Ireland. The youngest of ten children they lived in a terrace of houses that were built for workers in the local creamery.
He always had an interest in folklore and story telling. In 1979 a man came to live as a lodger in one of the houses in his terrace. He was in his eighties and was a veteran of the war of Independence (1919-1921). He was lonely and was anxious to talk to someone and Brendan was a willing listener. They struck up a friendship and the veteran relayed his stories of his young days and how he became involved in the revolutionary movement. Brendan was very engaged by his wonderful storytelling and my imagination easily took me on the journey back in time.
Not long into our friendship poor health overtook his friend, and he passed away.

Brendan grew up and went to college, met his wife Bridie and had six wonderful children. He worked in construction until the recession badly hit Ireland in 2009. "For the first time in my life I had no job and it was difficult to accept." There were many dark days and with the help of his wife and children he began to untangle emotionally. He had often spoken about writing a book and his children gave the support 'go for it Dad.'

In 2010 he finally began and as a complete novice at writing he struggled to get going. He consulted google and other forums to no avail. Then he decided that he would just tell the story as if he was speaking it and record it. It flowed from him and I just kept going. When he got about half way through he realised he had to put some order on the process and planned the narrative and characters out and started to refine the manuscript. Eventually he finished the story and sent a very raw manuscript to a freelance editor called Afric McGlinchy. Afric's editorial report gave him great heart and she was very helpful in honing his skills as a writer.

So the edit began and in 2015 "The Poacher's Curse" was finished and self published. Brendan thoroughly enjoyed the whole process of writing his debut novel and is currently working on a second one.
Audio Here