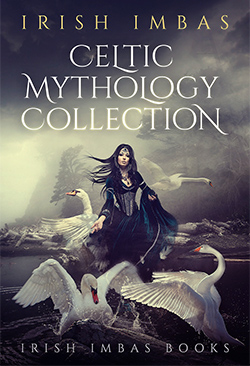 Two years ago, in response to a particularly serious bout of homesickness, my partner and I set up an Irish publishing business (Irish Imbas Books) in the basement of our home in Wellington, New Zealand. It was a daft idea, of course. I was an occasional writer, she had a legal background, but neither of us knew much about publishing

(and probably still don’t). We were also a bit delusional in terms of the practical realities of operating in our particular area of interest (fiction based on Irish mythology – and some non-fiction) while living so far from the key source of all that material.

FREE DOWNLOAD
We’re releasing a book this week called “Irish Imbas: Celtic Mythology Collection”, which is available for download free of charge on our website (if you sign up for our free newsletter on email) irishimbasbooks.com and through most of the better known ebook stores (Amazon, iBooks, Kobo etc.).

Surprisingly, seven books and two years later, we’re still going and the satisfaction of creative work that reconnects me with home every single day is now something I’d, personally, never be able to give up.

This book collates the winning submissions from the recent Celtic Mythology Short Story Competition and although its meant to be fun it’s also designed to inform. Most Irish people will be familiar with the topics of the short stories (the Children of Lir, the Fairies and so on) but unlike most of the plastic ‘Oirish’ books out there, this provides the true story behind those cultural elements and explains where the stories actually come from. It’s pretty much the first in what we see as a series of books that will attempt to debunk the huge volume of misinformation out there on the web relating to Irish/Celtic mythology.

What we refer to as ‘mythology’ today was actually a framework of ideas and beliefs used by our ancestors to understand the world around them. In the absence of modern-day science and technology, these people used an approach based predominantly on observation and deduction over an extended period, to make sense of the things they saw in their daily lives and environment but could not explain. Instead of developing theories or hypotheses to articulate those explanations as we would do today, they developed narratives or stories that used those observations and deductions. That’s why so much mythology is connected to questions of creation such as ‘Where did we come from?’ ‘Where did the moon and stars come from?’ or explanations for uncommon natural phenomena such as giant waves, earthquakes, rainbows, mists and so on. These stories, and others that helped to guide how people should treat each other, formed the basis of the Irish and Celtic cultural belief system.
Due to the impact of colonization and established religions, most of these stories were reduced to the realm of childish fable or cartoon caricature and much of what once existed was lost. We’re hoping our books go some way towards changing that.

We’re very proud of this work and delighted at the stories submitted by each of the authors (Sighle Meehan, Sheelagh Russell Brown, Marc McEntegart, Coral Atkinson and Marie Gethins). We genuinely hope you enjoy reading it as much as we enjoyed publishing it

Brian O’Sullivan
Irish Imbas Books (April 2016)
Contact for further information: B O’Sullivan at This email address is being protected from spambots. You need JavaScript enabled to view it.