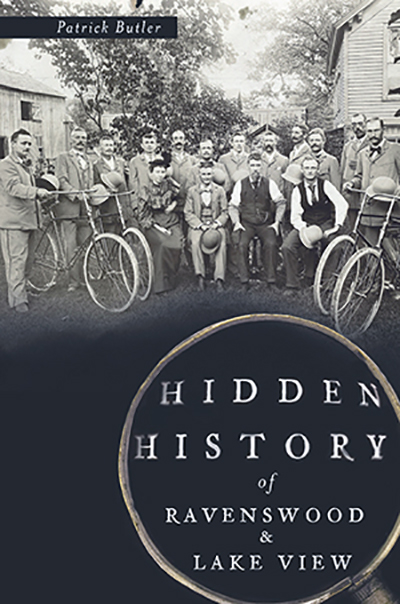 Hidden History of Ravenswood and Lakeview
by Pat Butler

It's easy to get caught up in the hidden history of Ravenswood and Lake View, like the Harm's Park picnic that lasted fifty-four years or the political gimmickry of the "Cowboy Mayor" of Chicago.
Buy Book Here
Who can resist a double take over folk like the "Father of Ravenswood," who kept Chicago from falling to the Confederacy, or the "North Side's Benedict Arnold," who was sent to the electric chair during World War II? If you want to visit the days when the Cubs were the Spuds or debate whether Ravenswood is an actual neighborhood or just a state of mind, do it with longtime North Side journalist Patrick Butler in this curio shop of forgotten people and places.

About the Author
Patrick Butler is a lifelong Chicagoan who has covered the North Side for over four decades, most of them as a reporter for the Lerner newspapers. He currently writes for Inside Publications Booster, News-Star and Skyline, which cover Lincoln Park and the Near North Side.