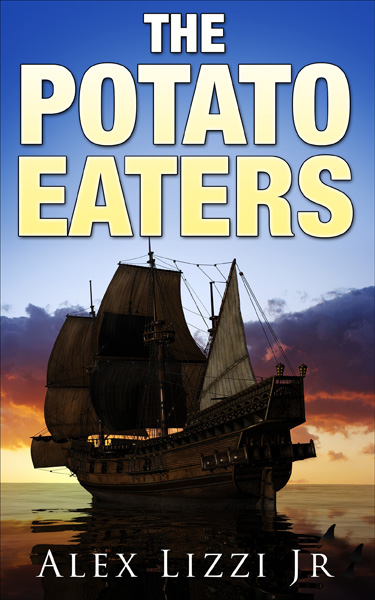 The nickname was given to the two and a half million Irish immigrants that arrived in America between the years of 1847 to 1852 from Ireland, on ships that were known as coffin ships.
Buy the Book!

This story is about two families, the Kellys and the Burkes who struggle to survive in their new country, after surviving Ireland’s potato famine and the suppression by the English government due to their religious beliefs of the time.

America has troubles of its own, with a flood of millions of European immigrants and the division forming between the North and the South over slavery. This is the story of how the Potato Eaters fight for their freedoms and for a small piece of the American dream.
James Kelly, a bastard, is separated from his family by accident in Ireland and ends up in New York, where he becomes entangled with the gangs of New York.
Katherine Kelly, James’s mother and her three younger children are on a ship bound for New Orleans.
Seamus Burke, the Burke patriarch, is on the same ship as Katherine, where the Burkes and the Kellys adventurous journey begins.

This story is based on historical facts on how millions of Irish sought to escape their poverty and despair during those 5 years of turbulent immigration and the evolution of how these two families and their cultural innocence though displaced,  find themselves at odds at the outbreak of the treacherous and tragic American  civil war.

Alex lives in Pine Colorado with his wife Janice. Alex has authored three books besides the Potato Eaters: Bonding the Rizzo family Vacation, Schoolhouse and Why?