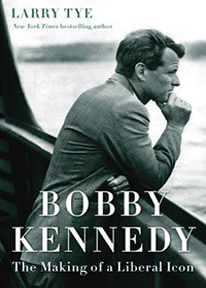 History remembers Robert F. Kennedy as a racial healer, a tribune for the poor, and the last progressive knight of a bygone era of American politics. But Kennedy’s enshrinement in the liberal pantheon was in fact the final stage of a journey that had its beginnings in the conservative 1950s. In Bobby Kennedy: The Making of a Liberal Icon, Larry Tye peels away layers of myth and misunderstanding to paint a nuanced portrait of this singularly inspiring figure. Buy Book, Kindle, or Audio CD Here

To capture the full arc of his subject’s life, Tye draws on rare access granted by Kennedy colleagues, friends and family, including unpublished memoirs, unreleased government files, and fifty-eight boxes of papers that had been under lock and key since Bobby’s death in 1968. Tye interviewed more than four hundred RFK intimates including his widow Ethel, his sister Jean, and his aide and closest friend John Seigenthaler – some of whom have never spoken publicly before, and too many of whom have died since.

Bobby’s transformation from cold warrior to fiery liberal is a moving personal story that also offers a lens into two of the most defining decades of twentieth-century American history. The first half of RFK’s career underlines what the country was like in the era of Eisenhower, while his last years as a champion of the underclass reflect the seismic shifts wrought by the 1960s. Nurtured on the rightist orthodoxies of his dynasty-building father, Bobby Kennedy began his public life as counsel to the Red-baiting Senator Joseph McCarthy. He ended it with a noble bid to unite working-class whites and poor blacks and Hispanics in an electoral coalition that seemed poised to redraw the face of presidential politics, and that offers a resonant counterpoint to 2016’s campaign of division. Along the way, Bobby turned up at the center of every event that mattered, from the Bay of Pigs and the Cuban Missile Crisis to race riots and Vietnam.

Bare-knuckle operative, willful White House insider, romantic visionary – Bobby Kennedy was all of these things at one time or another, and each of these aspects of his personality emerges in the pages of this new biography. 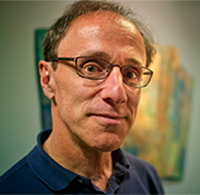 Larry Tye is a New York Times bestselling author whose most recent book is a biography of Robert F. Kennedy, the former attorney general, U.S. senator, and presidential candidate. Bobby Kennedy: The Making of a Liberal Icon explores RFK’s extraordinary transformation from cold warrior to fiery leftist.
Tye’s first book, The Father of Spin, is a biography of public relations pioneer Edward L.Bernays. Home Lands looks at the Jewish renewal underway from Boston to Buenos Aires. Rising from the Rails explores how the black men who worked on George Pullman’s railroad sleeping cars helped kick-start the Civil Rights movement and gave birth to today’s African-American middle class. Shock, a collaboration with Kitty Dukakis, is a journalist’s first-person account of electro-convulsive therapy (ECT), psychiatry’s most controversial treatment, and a portrait of how that therapy helped one woman overcome debilitating depression. Satchel is the biography of two American icons – Satchel Paige and Jim Crow. Superman tells the nearly-real life story of the most enduring American hero of the last century.

In addition to his writing, Tye runs the Boston-based Health Coverage Fellowship, which helps the media do a better job reporting on critical issues like public health, mental health, and high-tech medicine. Launched in 2001 and supported by a series of foundations, the fellowship trains a dozen medical journalists a year from newspapers,radio stations, and TV outlets nationwide.

From 1986 to 2001, Tye was an award-winning reporter at The Boston Globe, where his primary beat was medicine. He also served as the Globe’s environmental reporter, roving national writer, investigative reporter, and sports writer. Before that, he was the environmental reporter at The Courier-Journal in Louisville, and covered government and business at The Anniston Star in Alabama.

Tye, who graduated from Brown University, was a Nieman Fellow at Harvard University in 1993-94. He taught journalism at Boston University, Northeastern, and Tufts.

“A captivating account of the political career of Robert F. Kennedy, from his years as a zealous communist hunter for Joe McCarthy through the 1968 presidential campaign during which he was assassinated ate age 42.  For this state-of-the-art political biography, Tye conducted 400 interviews with people who worked with Kennedy. He also had access to national archives. The author’s admiration for his subject shows, but this is no hagiography…Shedding new light on Kennedy’s relationships with Lyndon Johnson and Martin Luther King Jr., Tye ultimately reveals Kennedy as a work in progress who, by the end of his life, had become a beloved advocate for minorities and the poor… [An] absorbing narrative”
– Library Journal (starred review)

“It is difficult to envision anyone getting Robert F. Kennedy more right than biographer Tye does in this superb book. Tye beautifully captures Kennedy’s contradictions, his emergence from under the hard-to-like father to whom he remained forever loyal, and his growth into a public figure killed by an assassin’s bullet. It’s also hard to imagine another biographer framing the subject any differently: Tye depicts Kennedy’s transformation from a callow, ruthless, hypocritical, “godawful disagreeable” man to his era’s “most nostalgia-wrapped figure” of “transcendent good,” someone who shifted as his nation changed. Tye equitably concedes that Kennedy’s detractors have much reason to be tough on the man, and his clear depiction of Kennedy’s many blemishes is just one of the book’s many fine qualities. Another is its wonderful readability. In the end, Tye’s subject stands forth as an admirable man. Yes, he often failed to level with people, hid his feelings, and pursued vendettas (notably against Lyndon Johnson). But as Tye shows, R.F.K. at the end of his life warranted the faith people put in him and came close to being the person his admirers thought him to be.”
– Publishers Weekly (starred review)

“The trouble with calling someone iconic is that the truth is often obscured under layers of mythology. Nowhere, perhaps, is that more pertinent than in the legends surrounding Robert F. Kennedy. Those of a certain age remember him as a Don Quixote–like figure tilting at the windmills of poverty, racism, and a prolonged war in Vietnam. Some may be aware that he was the right-hand man for Senator Joseph McCarthy, an arch conservative dedicated to rooting out Communist subversives. How and why did Kennedy morph from one to the other? Was the seasoned politician who ran for president in 1968 that far removed from the eager staff aide associated with such a controversial crusader? Through extensive conversations with Bobby’s widow, Ethel, and far-reaching interviews with key aides, colleagues, close friends, and ideological adversaries, Tye (Superman, 2012) unflinchingly illustrates the evolution of a statesman who captured the imagination of a generation and whose assassination galvanized a nation reeling from the losses of Martin Luther King, Jr. and, of course, Kennedy’s beloved older brother. Even-handed and probing, Tye’s perceptive analysis of RFK’s career and its impact avoids the hagiographic tone frequently associated with Kennedy biographies to provide a complete portrait of a complex man whose contributions to history were essential and whose potential will remain forever unknowable.”
– Booklist (starred review)

[Boston.com’s reviewer] Saraswat recommends this Robert Kennedy biography because the author had unprecedented access to unpublished memoirs, government papers, and other documents that hadn’t been seen in 40 years. “[Tye] did interviews with Bobby’s widow, Ethel, sister, and other people who have never given interviews to biographers,” she said. “So this is kind of the definitive book on Bobby Kennedy. It’s already gotten endorsements from Jon Meacham, who won the Pulitzer for his Thomas Jefferson book, and by Henry Kissinger. So I think it’s going to be pretty big.”
– Boston.com

“A former journalist at the Boston Globe returns with a comprehensive, thesis-driven account of the political career of Robert Francis Kennedy (1925-1968). Tye (Superman: The High-Flying History of America’s Most Enduring Hero, 2013, etc.) develops the argument that RFK was an evolving human being and politician, a tireless attorney general and senator on whom nothing was lost. The author begins with his association with one McCarthy (Joseph) and ends, more or less, with another (Eugene, whom RFK battled in the 1968 presidential primaries). Relying on countless interviews, including the contributions of RFK’s widow, Tye weaves a compelling story of Bobby’s changes: his growth from the “ruthless” image his political enemies attached to him to the committed humanitarian, the friend of African-Americans, the enemy of poverty, and the outspoken opponent of the Vietnam War. We see his devoted support of John F. Kennedy’s various campaigns, his vigorous performance as attorney general, his devastation after JFK’s assassination, his rancorous relationship with Lyndon Johnson. But mostly it’s his changes that interest the author. Not the student or scholar that JFK had been, RFK began to read—after the JFK assassination, he read Aeschylus and listened while he shaved to recordings of Shakespeare plays—and to inform himself deeply about the issues. Not a witty, graceful politician like his older brother, RFK worked hard to develop an effective style. Although Tye is a patent admirer, he wonders about RFK’s relationship with Marilyn Monroe, and he is also unsure about a possible affair with widow Jackie Kennedy. The author chides RFK for such things as slanting his account of the Bay of Pigs, his perhaps excessive pursuit of Jimmy Hoffa, and his early hawkishness on Vietnam. But the contrary image is clear: a good, if not great man; an unspeakable loss. Richly researched prose that sometimes soars too close to the sun of admiration.”
–Kirkus Reviews

“This is not just another Bobby Kennedy book. It is the definitive biography of one of America’s most compelling political figures. Larry Tye has given us the complete Bobby, from the Bad (Early) Kennedy to the Good (Later) Kennedy, from committee counsel to the red-baiting Joe McCarthy to the “ruthless” political manager to the gentle, soft-hearted presidential candidate. Tye’s book rests on prodigious and original research including rare, on-the-record interviews with Bobby’s widow, Ethel, who confesses that seeing Bobby for the first time was like meeting George Clooney.”
– Roger Mudd, former co-anchor of NBC Nightly News

“This biography will appeal not only to those wanting a portrait of a dynamic idealist, but also to those seeking to understand the emotions of the times in which he lived.”
– Dr. Henry Kissinger

“Larry Tye, with the eye of a good reporter, and the diligence of an accomplished scholar, writes a fascinating, timely report on the other Kennedy–the one named Bobby, who started supporting Joe McCarthy politics and died fighting in the anti-Vietnam war crusade.  Bobby has always deserved a crackerjack bio.  Tye has delivered it.”
– Marvin Kalb, senior adviser at the Pulitzer Center and author of Imperial Gamble: Putin, Ukraine and the New Cold War

“With skill  and verve, Larry Tye has written a fascinating account of a transformative figure who continues to summon us to heed our better angels even all these years distant.”
– Jon Meacham, winner of the Pulitzer Prize and author of Thomas Jefferson: The Art of Power

“Dreamy and calculating, joyful and sad, hard and soft, good and bad, Bobby Kennedy remains one of history’s fascinating and elusive figures. In this fair, lively, and insightful biography, Larry Tye makes him real.”
– Evan Thomas, bestselling author of Robert Kennedy: His Life and Being Nixon: A Man Divided

For direct links to most of the below events, click here!