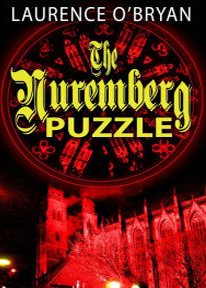 Orphans are being experimented on in Germany again, as the hunt for a virus that can specifically target genetic traits speeds toward a breakthrough.

Sean Ryan flies to Nuremberg to speak at an archaeological conference. An old girlfriend, Eleni Kibre, comes to meet him. She’s concerned about the violent anti-foreigner groups spreading fast across Germany.

The police arrive at Sean’s hotel to question him. Then Eleni’s partner goes missing.

The huge waves of refugees, who’ve spread across Germany in the past few years, have stirred up deep emotions. The long lost letters from Pope Pius XII to Adolf Hitler, which the Vatican wants, are the final pieces of the puzzle, which Sean must solve as the forces of evil close in on total victory.

A shocking secret, hidden for decades, is revealed in The Nuremberg Puzzle. Do not miss this electrifying straight-from-the-headlines thriller.