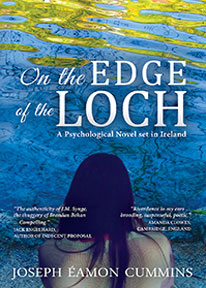 On the Edge of the Loch: A Psychological Novel set in Ireland

A man arrives in a tiny seafaring village in Ireland. His search is for a life, his own. He finds a radiant but mysterious woman who is distrusted locally, and is drawn into a web so profound that the lives of four impassioned people will be forever changed. Buy Book Here!

This critically-acclaimed novel is about people chasing incompatible dreams. They fight to connect, stay sane and defy fate, for the chance to love.

The reader is never permitted to see ahead, only to deal with the drama as it happens, which hikes up the tension and makes it impossible to predict the thrilling outcome (which the author asks readers not to reveal).

Praised as ‘brilliantly bright’ and ‘probably book of the year’, this is a literary voyage into those desires that make us courageous, vulnerable, and sometimes dangerous.

Critics have compared the work with that of John Millington Synge (Playboy of the Western World), Brendan Behan (Borstal Boy) and England’s Thomas Hardy (Tess of the d’Urbevilles, Far from the Madding Crowd).

New York Times and USA Today best-selling author Jack Engelhard (Indecent Proposal) said ‘One exquisite insight after another, each chapter a literary or visceral delight. I could not wait for nor predict the sublime outcome. Epic!’

Critic James Rutherford said: ‘Resplendent, as cinematic as the sweep of Ireland itself’.

An Amazon reviewer wrote: ‘Breathtaking! You’re unlikely ever to forget it’. 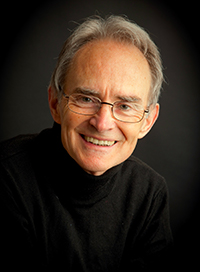 About the Author
Award-winning author Joseph Éamon Cummins taught creative writing and psychology for ten years in the US, earning multiple Best Professor citations. Before that, over a long period, he documented his adventures travelling ‘on the road’ in America and touring with carnivals, while at the same time photographing a continent that fascinated him - ‘from sea to shining sea’ - a very rich education, he says, still benefiting him. He later returned to academic work and today leads workshops internationally in organisational psychology, human achievement and resilience, and he speaks occasionally on psychology in fiction writing. A Dubliner, Joe is still ‘on the road’ but otherwise lives in Ireland with his wife Kathy.

Extras in the Book
The book contains 1) a 10-page Guide for Book Clubs, Teachers and Writing Students and 2) a revealing interview with the author.

Author's Note to Readers
On the Edge of the Loch: A Psychological Novel set in Ireland broke into the Amazon Top 20 at #13 (British & Irish Literature), where it carries close to a 5-star rating and rave reviews.

Here is the (true) inciting incident that affected me in such a way that I had to write the story:

One Irish autumn evening,
in a little picturesque train station,
I noticed a graceful young woman sitting alone;
she looked to be waiting for someone to arrive.
Over the next week I re-visited the station on
five occasions to photograph it in different light.
The woman was there every time,
still waiting.
On the day I was to leave
we somehow found ourselves closer to each other.
She smiled at me, warmly. I smiled back.
Our eyes held in a sort of silent conversation.
She leaned closer,
like she was about to talk to me, maybe tell me something.
But suddenly her head dropped,
she turned away.
I sensed that she was waiting for a dream,
a dream that would never show up.
But what if, I thought . . . what if that dream . . .

That's how this woman inspired the novel. I couldn’t make her the main character because at first she’s too much of a mystery. So I wrote a bigger story around a driven man, and married the two.

Author Email (for info, speaking engagements, etc): This email address is being protected from spambots. You need JavaScript enabled to view it.

Additional Reviews
This story is dark and frightening and brilliantly bright . . . heart-pounding action scenes to increase your nervousness. I’ll read it again for rhythms of other Dubliners, like James Joyce.
Dick Noble Author of The Adventures of Mousco Polo

Characters who feel alive; you truly care about them. I was continually hoping I had foreseen what lay ahead. I hadn’t! Heart-stopping moments, romance, tenderness. What a great movie this would make!
Emma Feix Alberts, Author of All That Is Familiar

Intricate wording, exquisite characterisation. In the tradition of Thomas Hardy, Cummins blends the Irish landscape with psychological intrigue to produce a truly compelling read.
Daniel R. Flinn, Author of Dancing with the Ants

Left me wondering what became of the characters as their lives went on: the utter inhumanity of war, the hopelessness of incarceration, unbridled self-sacrifice; provides the reader with many layers to ponder.
Nigel Castle, Ely, Cambridgeshire, UK

I was captivated. I felt I was almost part of the characters’ souls. You think you know where the writer is bringing you, then you realise you don’t have a clue! Full of raw emotion and fantastic characters!
Janet Mooney, Dublin, Ireland

A tapestry of themes jagged and brutal, forgiving and abiding. You can touch the texture of the thoughts and feelings of Cummins’ characters. Honest, unpretentious, unapologetic. A very good read.
Robert S. Galasso, Vancouver, Canada