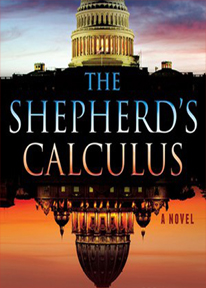 by C.S. Farrelly
THE SHEPHERD'S CALCULUS is a fast-paced political thriller that examines what happens when those cornerstones of American identity–capitalism and religion — clash with its principals of justice.

When journalist Peter Merrick is asked to write a eulogy for his mentor, Jesuit priest James Ingram, his biggest concern is doing right by the man. But when his routine research reveals disturbing ties to cases of abuse and clues to a shadowy deal that trades justice for power, everything he believed about his friend is called into question. With the US presidential election looming, incumbent Arthur Wyncott is quickly losing ground among religious voters. Meanwhile, Owen Feeney, head of the US Conference of Catholic Bishops, is facing nearly a billion dollars in payments to victims of sex abuse. When Feeney hits on a solution to both men’s problems, it seems the stars have aligned. That is until Ally Larkin—Wyncott’s brilliant campaign aide—starts to piece together the shocking details. As the election draws closer and the stakes get higher, each choice becomes a calculation: Your faith, or your church? Your principles, or your candidate?When the line between right and wrong is blurred, how do you act, and whom do you save? At this explosive intersection of greed and faith rests the calculation each of us makes about when to do the right thing and why.

Cassie Farrelly was a 2004 Mitchell Scholar and has maintained long ties with both the Alliance and Ireland since that time.