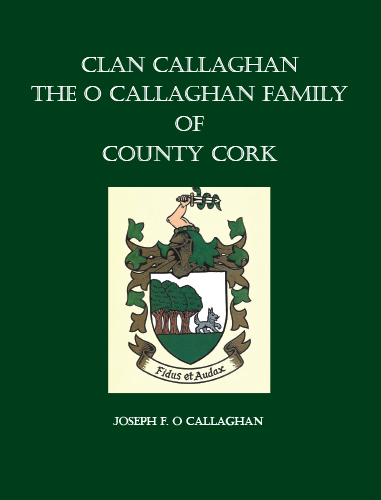 Synopsis
This impeccably researched and stylishly written family history traces the O Callaghans (Callaghan, Callahan) from their mythic beginnings in Ireland to their present-day progeny in County Cork, Spain, the United States, Australia, and other places. Prepared by Joseph F. O Callaghan, distinguished professor emeritus of medieval history at Fordham University, Clan Callaghan is the standard against which all future studies of this family will be measured.

The O Callaghan family is an ancient one, tracing its descent in Ireland from the tenth-century king, Cellachán of Cashel, celebrated in the annals and in the mists of legend. From their original homeland around Cashel, the O Callaghans migrated into County Cork, where they became–and remain today–one of the largest family groups.

The core of Professor O Callaghan’s narrative traces the Clan Callaghan’s fortunes from the extension of English control throughout Ireland during the course of the 16th and 17th centuries through the great Irish diaspora of the 19th and 20th centuries. For example, in 1594 the chieftain, Conor of the Rock, surrendered the clan lands to the Crown, receiving them back to be held thereafter under English law as a personal estate for himself and his immediate family.

Following the treaty of Limerick in 1691 many O Callaghan soldiers went abroad to serve in the armies of France, Spain, and Germany and to set down new roots. The failure of the potato crop and the Great Famine in the 1840s decimated Ireland’s population and stimulated emigration. Colonel John O Callaghan of Bodyke in Clare gained notoriety for hostile relations with his tenants, while the O Callaghans of Dromcummer in Cork exemplified the many who were evicted for failure to meet their rental obligation.

As the twentieth century opened, the failure to gain Home Rule dealt a severe blow to the parliamentary tradition and prompted the Easter rebellion in 1916. In the struggle for independence Michael O Callaghan, former Lord Mayor of Limerick, was assassinated by the Black and Tans, and Donal O Callaghan, Lord Mayor of Cork, represented the family. By this time, of course, the great migration of the late nineteenth century to England, America, Canada, Australia, and elsewhere was on. Seeking to escape wretchedness at home and to find better lives for themselves and their children, thousands of O Callaghans (most identified as Callaghans) took part in this diaspora. As the author documents, they or their descendants achieved a measure of prosperity unknown at home and some achieved great distinction as historians, theologians, biblical scholars, military heroes, and in nearly every other form of human endeavor.

About the Author
Joseph F. O Callaghan, Professor Emeritus of Medieval History and former Director of The Center for Medieval Studies at Fordham University, is also past president of the American Catholic Historical Association. His primary academic interest lies in the history of medieval kingship and parliaments with particular attention to medieval Spain. His publications include Alfonso X, The Justinian of his Age: Law and Justice in Thirteenth Century Castile (2019), Reconquest and Crusade in Medieval Spain I (2003), The Gibraltar Crusade: Castile and the Battle for the Strait (2011),  The Last Crusade in the West: Castile and the Conquest of Granada (2014), Alfonso X and the Cantigas de Santa Maria: A Poetic Biography (1998), The Learned King: The Reign of Alfonso X of Castile (1993), The Cortes of Castile and León, 1188-1350 (1988), and A History of Medieval Spain (1975).

The roots of his family are deep in Ireland, particularly  in County Cork. His father came from Dromcummer on the Blackwater River and his maternal grandfather, Michael O Sullivan, from Ardnagashel on Bantry Bay. A lifelong interest in the history of the O Callaghan family led to the publication of this book.