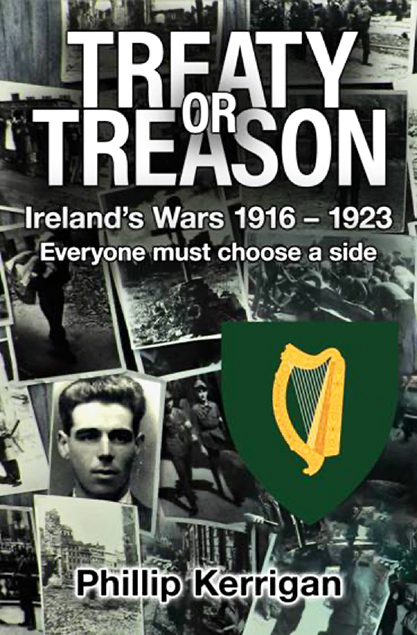 Synopsis
“Treaty or Treason” is a 20th century Irish saga of a friendship that faces many challenges and ultimately falters.  The 1916 Easter Rebellion, the War of Independence and a Civil War all occurred within eight years. They pushed the small country of Ireland into an acceptance of a future not many wanted but was thrust on them by a power they could no longer resist.

It tells the story of two young men growing up in rural County Westmeath and becoming warriors for their Republic. Yearning for the normal lives of nineteen year olds but resorting to violence they little understand and making decisions on the run.”

Westmeath, a county in the Irish midlands. It’s the beginning of the 20th century and two boyhood friends grow up in the rural countryside dominated by the British military in Athlone. “Treaty or Treason” is an historical fictional account of those whose lives were affected by the major events in Ireland in that time.

They grow into young men in a heart breaking coming of age, seeing the horror and heroism of the Easter uprising debacle in 1916 unfold in Dublin. But it is an event that ignites a national blaze and turns the two young men into revolutionary fighters whose secret activities put them in grave danger and change their lives.

For two years from 1919 they fight the Irish War of independence against the mighty British Empire all the time seeing the prize of their beloved Republic and independence getting closer for Ireland.

The brutality of their foes, the mercenary Black and Tans and their treatment of the civilian population forges their friendship and resolve. Their society has been torn apart, their leaders challenged. The boot heel of Imperialism stamps down on their country.

This is a saga of boys to men to fighters at a time when the world is recovering from World War 1. But for Ireland the struggle is just beginning and the fight will be ferocious and vicious against a powerful enemy.

Joe Keegan and Sean McKeon stand shoulder to shoulder, victory is in sight. But at the last minute it is snatched away by the politicians and leaders who see a different way forward. A Treaty and Dominion status, not a Republic will be accepted.
Buy Book Here!
For the whole country, choices must be made that were never foreseen.

A Civil War looms, it will be ugly and Joe and Sean now have to make a choice: Treaty or Treason!

Joe never doubted he would join with the anti Treaty forces of the IRA but Sean confounds Joe and accepts the Treaty and joins the Provisional Government Army.

Friends become enemies and their lives and loves are compromised by the deep emotional divisions within the country that survive to the modern day. Joe’s relentless fight against the powers of his former comrades destroys his freedom and many thousands of others like him who are imprisoned in their quest for their ideal.

Joe loses his dream as Sean commits himself to a future that demands allegiance to a power he had hoped to defeat.

The young man in the middle of the photo collage on the cover is Joe Kerrigan just before he boarded a ship to Australia in 1924.

I have now started research on a sequel to “Treaty or Treason” which starts with Joe and his brother Hugh arriving in Sydney on Christmas Day 1924.

I plan to tell of families over the next 100 years growing up in Australia and being impacted by that particular country and culture, ending in 2025.  It won’t be my family but fictional families that experience that period of history in my country. 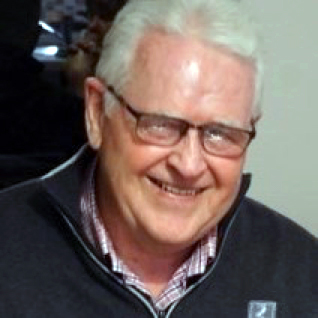 About the Author
Phillip Kerrigan is an Australian author of Irish descent on both sides, and I live in Sydney. My interest in Irish politics and history led me to this story as my father was a participant in those troubled Irish times. This is not my father’s story but he was the template for Joe Keegan, one of the main characters.

I was the youngest of a “traditional” Irish Catholic family of twelve, six boys and six girls though one boy died soon after birth in 1944.

My working background is that I studied Accountancy, then worked in the office of a manufacturing company in Sydney and later joined a successful and growing cosmetics company as the Accountant and went on to a number of senior positions with them, leaving twelve years later. I decided soon after to take on an Apple Computer reseller business with a partner. I ran this for twelve years ultimately selling it to a US based catalogue company in the mid 1990s.

Then for a number of years I went into consultancy work with Small to Medium Businesses assisting them with the challenge of converting to computer based accounting. Some health problems decided me to retire in the early 2000s.

So later in retirement and lock down and looking for a new project I started researching my Irish background, specifically my father’s involvement in the War of Independence and the Civil War and his subsequent internment of 18 months for IRA activity.  I had visited Ireland twice previously in 1978 and 1995 and planned to go back in 2021, however....

The research was very enjoyable and one is in debt to the help from researchers, authors etc whom you approach uninvited but who help you with information. Little snippets can provide chapters for a fiction writer!

Kathleen’s earlier work “They Put The Flags a’Flying’” specifically covered the midland counties involvement in the Wars and it was there I found my father’s name, plus his two brothers, who were arrested in 1922.

In 2020 I decided to write a novel about those times with a template of my father’s involvement fulfilled by Joe Keegan.