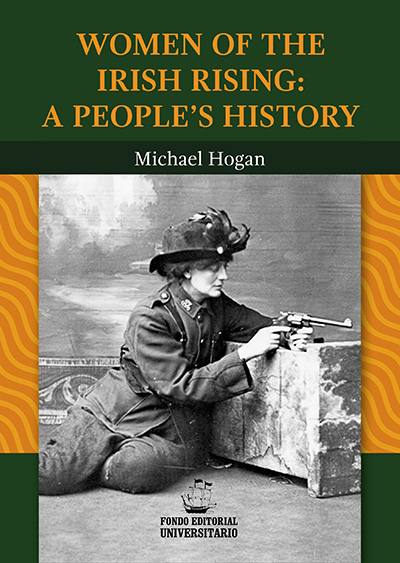 In his important and engaging new book, Women of the Irish Rising, Michael Hogan redresses a longstanding wrong by explaining and historically documenting the contributions of women who courageously and selflessly served the cause of Irish nationalism during the Irish rebellion of 1916 and after. Hogan skillfully weaves their active engagement for the cause as gun runners and snipers, secretaries, aides, and nurses, into a complex web of political, social, and economic forces.

Based on a rich panoply of primary sources, including diaries and journals, news accounts, proclamations, and other archived historical information, Hogan’s book is enriched with a range of visuals—a timeline of the weeklong rebellion with maps and charts, images of guns and flags, along with a treasure-trove of pictures of the key women and men who planned, coordinated, and led the insurgent uprising.

About the Author
Michael Hogan Michael Hogan is the author of 27 books, including the best-selling Irish Soldiers of Mexico and which has been the basis of an MGM movie and three documentaries. He is Emeritus Humanities Chair at the American School Foundation of Guadalajara, and a former professor of International Relations at the Autonomous University of Guadalajara.

He is a member of the Organization of American Historians, the International Association of Military History, and the Society of Geography and Statistics in Mexico. Dr. Hogan is a second-generation Irish American with roots in both County Kerry and County Clare and has worked extensively in Ireland with the Mexican Embassy promoting Irish Mexican solidarity and shared traditions.
www.drmichaelhogan.com