Nova Scotia. All 229 men, women and children on board perished, including Ivy Bannister's sister, Patty. Set in Dublin, New York and the South Shore of Nova Scotia, Blunt Trauma is the true story of how one family's life was ravaged by the terrible event. When Ivy Bannister switched on BBC radio from her home in Dublin the following morning, she has no idea that that the first thing she'd hear would change her life forever. An ocean away from the tragedy that claimed her sister's life, Ivy soon left her family to be with her 80-year-old mother in New York City. What follows is a poignant day-by-day account of how she coped with the tragic death of her sister, and the painful practicalities of identifying remains and disposing of possessions. Meetings with lawyers and airline officials prove difficult, as is the daunting task of clearing out Patty's apartment. Overwhelmed by a lifetime's worth of accumulated belongings and the "heartbreak of unravelling" her sister's possessions, Ivy soon realises that Patty's home was a shrine to the past and of future wishes.

Abiding to her mother's philosophy of "waste not, want not," Patty kept everything. From ticket stubs and guidebooks, to outfits worn in their childhood, pristine china and a stockpile of things she saved for the future, Ivy struggles to understand the woman she had lost touch with so many years before. Adding to the heartache is Ivy's turbulent relationship with her controlling mother. A feisty, stubborn, disapproving woman set in her own ways, Hortense finds fault with everything and everyone around her - including her one remaining daughter. Hampered by her mother's fierce need to keep her life private, her unreasonable demands, her angry outbursts and her irrational paranoia, Ivy holds on as her mother's response to one daughter's violent death wounds the other. A poignant story that will touch the heart, Ivy Bannister lets readers into her family life so we may all understand the grievous wounds that disasters inflict upon those whose loved ones have vanished. Blunt Trauma takes a powerful look at tragedy, grief and acceptance in an intimate, fast-paced, and sometimes startling story that shows the past as illuminated by the present and explores how catastrophe shatters imperfect familial relationships. 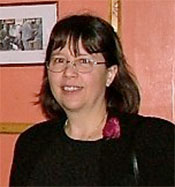 Ivy Bannister was born in New York City in 1951. Her short story collection is Magician (Dublin, Poolbeg Press, 1996). Many other stories have been published and broadcast, including What Big Teeth, filmed as Forgetting Aphrodite (2004)

Her plays have been produced on stage and radio in Ireland, the UK and Germany, among them, The Wilde Circus Show (Delaware, Proscenium Press, 1990). Poems have appeared in journals and anthologies in Ireland, the UK and the USA, and she has broadcast fifty pieces on RTÉ Radio’s Sunday Miscellany.
Awards include the O.Z. Whitehead Play (1986), Best Play Listowel (1987), Hennessy Short Story (1988), Mobil Ireland Play (1993), Francis MacManus Radio Story (1999), Best Small Collection of Poems Listowel (2005), and others.
She received an Arts Council Bursary in 1994.
She lives in Dublin.