Irish immigration to Haverhill, Massachusetts, was a constant from the days of the Great Famine to the present. The immigrants, their children, and their grandchildren have become an integral part of the fabric of the city’s history. Some were teachers, politicians, police officers, and business owners, while others spent their lives as city laborers and factory workers. Whether these new residents were wealthy or poor, well known or little known, their experiences in America could not eliminate their common ties to the Emerald Isle. They collectively share a place in this “family album” of those Irish citizens who called Haverhill their new home. This volume is the sequel to the The Irish in Haverhill, Massachusetts, which was published in 1998. The response to that book was so enthusiastic that the author was overwhelmed with offers of additional photographs for a second volume. 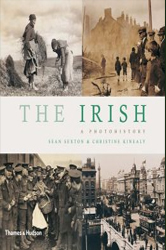 The first Irish photographs date from 1840, a year after Louis Daguerre announced his discovery of the photographic process. In the century that followed, Ireland was to know tragedy and triumph, bitter struggle, and agonized compromise. Buy the Book!