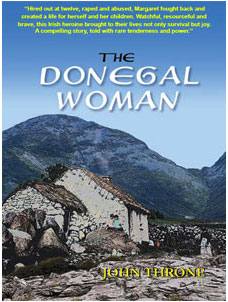 A true story of survival against all odds.
Less than 100 years ago a form of slavery still persisted in parts of rural Ireland - the hiring fair system. Children as young as seven or eight were sold for fixed periods by their impoverished parents to farmers who worked them to the bone,treating them often as little more than cattle. Often worse.

The Donegal Woman is based on a true story of the author's own grandmother. Born to the poorest of Protestant farmers in the hills of Donegal, Margaret was hired out as a child, raped by her master, and then, pregnant, forced to marry another man many times her age. But Margaret survived in a silent world of her own, driven by her passionate determination to do right by her children.
Reviving the tradition of three of Ulster's great radical writers, Peadar O' Donnell, Patrick MacGill and Sam Hannah Bell, this author, in his first novel, has captured the authentic voice of a woman of extraordinary spirit.

Author
The author, John Throne - a native of Lifford, Co. Donegal, has spent most of his 62 years involved in the labour movement as a socialist organizer. He first became active in the Derry events of 1968 and later moved to Dublin where he became one of the central figures on the left of the Labour Party and a member of its Administrative Council. Among the many he recruited to socialist politics was now TD Joe Higgins.

For the last decade he has lived in Chicago. The Donegal Woman is his first novel.