Destined to save his world from Chaos and restore the peace of centuries past, Silverhand seeks the Arcana, the ultimate emblems of cosmic power which contain the ability to create or destroy entire worlds.

He is Silverhand, who was foretold, destined to save the world from Chaos and restore it to the state that now lingers on only in dreams and pangs of secret human desire. To do so he needs the Arcana: The Spear of Light, The Stone of Destiny, The Cup of Blood, and The Sword of Flame. Once the treasures of the gods of creation, they have been for eons lost to both gods and men.

Properly used, they can defeat the rising tide of evil that is sweeping the world. But if Silverhand fails to find them or uses them ill, or they fall into the hands of his enemies, the world will be plunged into an eternal nightmare of suffering and death.

Caeled, star of Silverhand, possesses two magical artifacts that allow him to affect events but cause him to age with every use. Joined by three companions who hate the despotic twins who rule the world, Caeled seeks the remaining two Arcana artifacts that he will use to restore order to the world. A morality tale about how much power one can have and whether to use it that belongs in most fantasy collections. 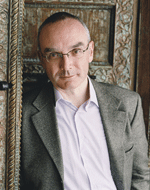