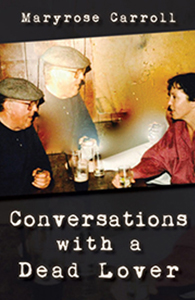 The poems in Conversations with a Dead Lover, by Maryrose Carroll, are beautifully contemplative, yet deeply visceral. Addressed often directly, often peripherally, to her husband, the great American poet and editor, Paul Carroll, they take head-on the conundrum of love in its myriad guises. This is a book of breathtaking candor, the poet’s seemingly limitless threshold for apprehending a love intensely physical, but also mystical, of another plane, of nuanced touch and texture, a love that accrues only by abiding the earth’s lore and orbit, yet reckons that unseen world beyond our ken. Carroll’s language – at once stunningly plain and otherworldly as the bluest cloudless sky – ‘[joins] all [her] kin / whether dressed in silk or tatters.”

Review:
In Maryrose Carroll’s Conversations With a Dead Lover, the poems are at once, a mystery, a love story and a blend of observations and explorations that pull us into uncharted waters. The language, both informal and highly textured, is compelling and almost unclassifiable, something not often found in contemporary poetry. With Carroll’s use of a ‘chorus’ the poems carry with them the feeling of a Greek play. “And the Romans shouted in train stations… / As we made out pilgrimage south to Ferlinghetti’s / Big Sur where a clogged cabin chimney / fire detritus left by Jack Kerouac forsake us / shivering while we tried to sleep / And the ocean cracked and crashed against the shore…” Conversations With a Dead Lover is refreshingly candid and suffused with wonder.
Earl LeClaire – January 29, 2017