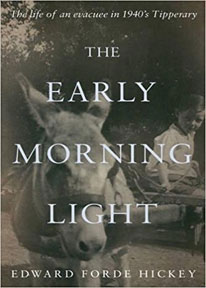 “The life of this little evacuee couldn’t be more different from those other unlucky children his own age, who had been left behind in a state of dreamy delirium on the battered streets of London.”

While World War II was raging and turmoil spread throughout Europe, thousands of children were evacuated in the hope of protecting them from the trauma of war. Among these children was newly-born Edward (Teddy), who was rescued from the terror of the London Blitz by his parents and sent to live with his grandmother in Tipperary, Ireland.  Buy Book Here

He spent his childhood among the vibrant hillside community, where he had the rare opportunity to develop at the hands of nature. The Early Morning Light is a celebration of his young life, which was a stark contrast to those of countless other children living traumatised across Europe.

Inspired by literary greats such as Virgil and Kafka, The Early Morning Light is a compelling memoir that will appeal to those who enjoy reading about family life during the Second World War.

‘A wonderful collection of tales, resounding with a sense of loss and valediction... An exquisite description of nature.’
Ben Evans, Literary Editor, Addison & Cole

‘A vibrant and entertaining description of Ireland in these wartime years... An enjoyable text, laden with a nostalgia for a rural childhood... written in a lyrical style, very much in the Irish literary tradition.’
Jakob von Baeyert, Director, Addison & Cole

'Touching, heart-warming, thought-provoking and always charming, The Early Morning Light is a worthy companion – and in some ways a sorely-needed corrective – to Angela's Ashes. Edward Hickey has made a heartfelt plea to keep alive the memory of the heartland of wartime Ireland and he does so with compassion and panache.'
Jake Wallis Simmons (author and journalist)


About the Author
I am a retired head teacher, having taught in Inner London schools for almost 40 years.
I studied Classics at London University and I took my M.A.(Curriculum Studies) at Goldsmith College, London.
I have been happily married for 43 years and we have 3 fine sons.
I spent my early years in Tipperary.
I have a small farm in The Silvermines Mountains (Tipperary) and I visit it frequently.