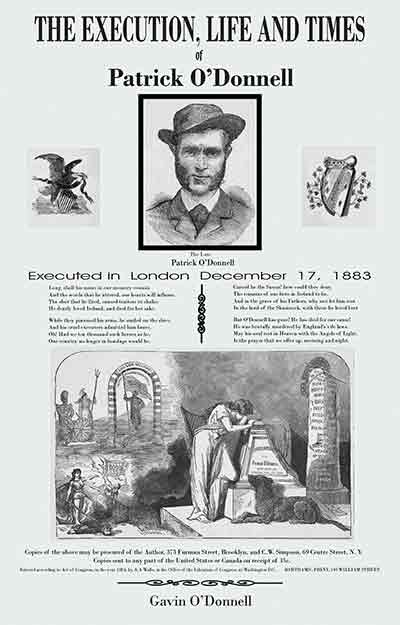 Synopsis
The Execution, Life and Times of Patrick O’Donnell is a book every Irish American should read!  A first-hand account of some of the most monumental events of the mid to late 19th century in fascinating, honest and brutal detail through the eyes of Patrick O’Donnell’s the author’s ancestor.

O’Donnell, remembered for the murder of James Carey, the leader of the Phoenix Park Murder gang The Invincibles and the notorious turn coat who sent 5 of his gang to the rope in exchange for his freedom and a ticket to south Africa.
An intelligent, well researched book which tells us of the experiences of a nation’s impoverished at the hands of British imperialism, the desecration of a nation in the US civil war; the murderous Pennsylvanian coal fields; famine; madness and love and more, all though the personification of just one of those people; O’Donnell.

A truly revealing, exciting and enriching read ostensibly a story of one but in reality the story of so many.

December 1883 and O’Donnell, already condemned to death, begins to record his incredible journey to its dreadful and inevitable conclusion at the end of a noose. His letters, written with passion and brutal, unvarnished honesty, lost for 133 years, now found and presented, for your consideration, in this unique book.

For 12 days in his death cell Patrick frantically recalls his entire life. The chronicle is incredible, taking the reader from the man’s beginnings in Co Donegal, the Famine, escape to America in 1847 via a dreadful ‘coffin ship’, the Typhoid sheds of Grosse Island where he meets the incredible but broken Hanora, a beautiful and dangerous woman; his one love, but not as most people know love.

Mental health, confused sexuality, love, loss, hope and despair are his lifetime companions; whether that is during the American Civil, in which he fights for the wrong side, or visiting his love in the New York Lunatic Asylum.

The ending is astonishing and on reflection, though disputed, seems more and more likely to be true, the most incredible truth of the whole book. The Cavendish Family (Phoenix Park) and Gladstone himself owed the man a debt that had to be repaid. Was it?

Bio
Gavin is a 61 year old Irishman living in the UK. Educated in Wales, Ireland and N Africa; he achieved his Batchelor of Laws in 2001. He served as a Magistrate until 2017 when he resigned as he did not like sending people to jail. he has been married for 37 years to an incredibly patient Linda. Gavin inherited 'the letters' from his late brother in 2012 and had no idea what they were until 2016. His first book is a memoir, this is his second. He is currently working on his third along with a screenplay for the Execution Life and Times of Patrick O'Donnell.

Link to more about the book: